Cambodian hol is woven on a plain warp, with all the design being in the pre-patterned weft (see Hol Weft Preparation). Once the warp is wound onto the board that will hold it at the foot of the loom, the hundreds of ends of very fine silk must be threaded through the reed (heddles are created once the warp is on the loom).

These women have almost finished threading this warp:

The warp on it’s board and threaded reed at the loom frame:

This loom is completely set up and a blanket keeps dust off the warp wound on the end-board:

The patterned weft has already been wound onto bobbins, which have been carefully kept in order and hung on the side of the loom:

The first of these is placed inside a cylindrical shuttle, traditionally made of a length of bamboo tipped and tailed with buffalo horn or wood. Increasingly, PVC pipe is used for the tubing.

Spare shuttles and bobbins are kept handy in a recycled bottle hung on the loom frame:

Each time the shuttle feeds the weft thread through the warp, the weaver must visually align that section of patterned thread with the pattern on the fabric she has already woven.

A straight line dyed at each edge of the pattern helps:

As soon as it is aligned, she changes the shed with her foot pedals so that the warp grips the patterned thread in the correct position. She simultaneously beats it into place with the reed.

Watch closely (look at the white dot at the left as it gets lined up):

You can see how the pattern turns into a fuzzy mess of dots if the patterned weft threads are not aligned if you look at the beginning of the weaving, when the weaver was not worrying about the pattern:

For me, the magic of hol lies in the combination of this beautiful ikat weft patterning with the 2/1 twill that allows the warp colour to show more on the back of the fabric, muting the weft pattern, the weft pattern to show more vividly on the front, and the degree to which warp and weft dominate to vary according to the angle from which the fabric is viewed. This means that when the fabric is draped, and especially as it moves with the wearer, it shimmers and changes in a beautiful way.

In this image, the pale warp is dominant at the left, and the front of the fabric, pictured on the right, displays the colours of the weft pattern more clearly:

I had long known that this was achieved with twill using 3 sets of heddles, but I was so happy to finally see the process for myself (and to sit at one of the looms and weave a few rows!)

The 3 sets of heddles…

As the first pedal is depressed (above), the first of the 3 sets of heddles is pulled down, pulling the 1st in every 3 warp threads down:

So every pick of the weft passes over 1 warp end then floats under 2 warp ends, resulting in the weft threads showing 2/3 more on the underneath surface than the warp threads. On the upper side of the fabric, the warp is floating over 2 weft threads at a time and so it’s colour shows more on the side seen by the weaver.

If you double-click on the image below and enlarge it in your browser to 200% or more, you can make out the diagonal lines resulting from this twill structure and see how one set of threads dominates. This shows most clearly at the stripes created by 2 picks of white weft: the white weft threads are visible on this surface more than they are hidden underneath the warp because they are passing over 2 warp ends and then under 1 warp end. (This is the side of the fabric seen from underneath the loom.) 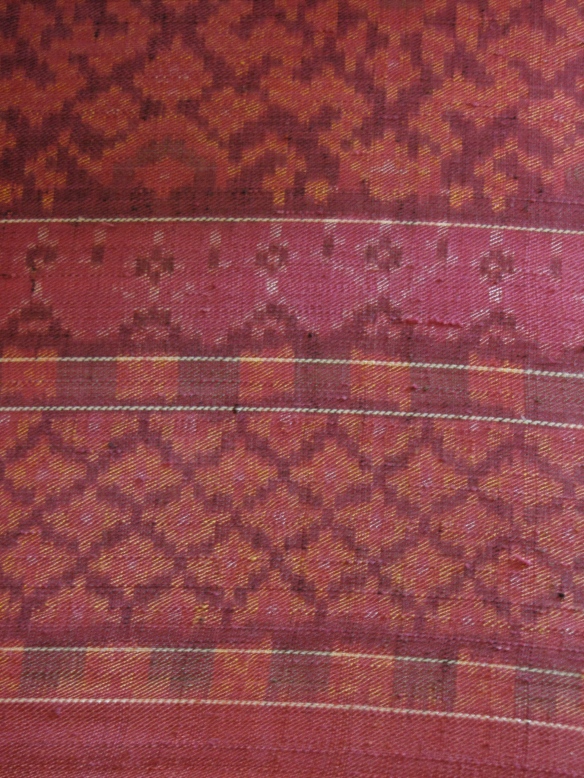 See the finished products in a hol shop in the capital, Phnom Penh.

Later I will post images of hol weaving in other parts of Cambodia, including video of Cambodian string heddles being made at the loom in Siem Reap.